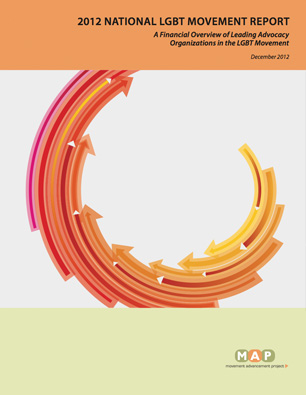 Revenue and Expenses. Following several years during which organizations’ revenue declined, leaner and more flexible LGBT social justice organizations are reaping the benefits of belt-tightening years and increased efficiency. LGBT movement experienced a 17% increase in revenue from 2010 to 2011. Participating organizations are projecting expense budget increases of 13% for 2011.

Fundraising and Fundraising Efficiency. The number of individual donors increased from 2010 to 2011 after several years of declines. Additionally, fundraising operations continue to be efficient, with only 12% of expenses spent on fundraising, and 80% going directly to programs and services—surpassing benchmarks of the American Institute of Philanthropy and Better Business Bureau Wise Giving Alliance.

Other Indicators of Financial Health. Other indicators remain strong. Increases in revenue and decreases in expenses have allowed organizations to increase cash and investments. The average organization had nearly six months of working capital in 2011.