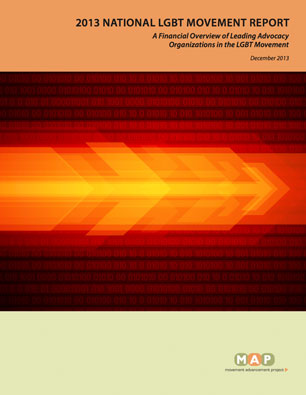 Revenue and Expenses. LGBT social justice organizations’ revenues exceeded expenses by $3.2 million in 2012, and the 4% growth in revenue from 2011 to 2012 slightly outpaced the national average for all nonprofits of 3.2%. The increased revenue in 2012 marks two years of growth after a two-year revenue decline in 2009 and 2010. Although revenues are still not back up to 2008 levels, the last two years of growth indicate that the LGBT nonprofit sector, like the American economy, is experiencing a slow but steady recovery after the recent economic downturn. Participating organizations are projecting combined 2013 expense budgets of $165.6 million, a 10% increase from 2012 expenses.

Fundraising and Fundraising Efficiency. Fundraising and individual donations continue to increase, with a notable spike in government funding due to several organizations receiving large grants, likely due to the Obama Administration’s increased awareness of and attention to LGBT issues. Movement groups are highly efficient in their fundraising and programming operations. On average, 81% of total expenses are dedicated to programs and services —exceeding benchmarks of the American Institute of Philanthropy and Better Business Bureau Wise Giving Alliance.