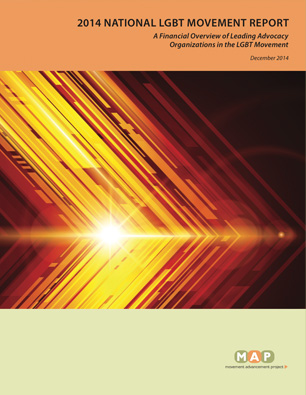 Revenue and Expenses. LGBT social justice organizations’ revenues grew 7% from 2012 to 2013, with revenue exceeding expenses by $5.8 million in 2013. This financial growth continues an upward trend that re-emerged in 2011, following a downturn experienced by the LGBT movement during the Great Recession. Increases in expenses and revenue closely tracked national averages for nonprofits: nationally, total nonprofit revenue increased 7.8% and expenses increased 4.5%. Participating organizations are projecting combined 2014 expense budgets totaling $185.9 million, a 14% increase from 2013 expenses.

Fundraising and Fundraising Efficiency. Fundraising and individual donations continue to increase, with a notable spike in revenue from individual giving, which increased 15% from 2012 to 2013, compared to a 4.2% nationwide increase in nonprofit giving. Movement groups are highly efficient in their fundraising and programming operations. On average, 81% of total expenses are dedicated to programs and services—exceeding benchmarks of the American Institute of Philanthropy and Better Business Bureau Wise Giving Alliance.

Other Indicators of Financial Health. General financial health remains strong. In 2013, organizations reported an average of nearly six months of available working capital, a 9% increase from 2012.