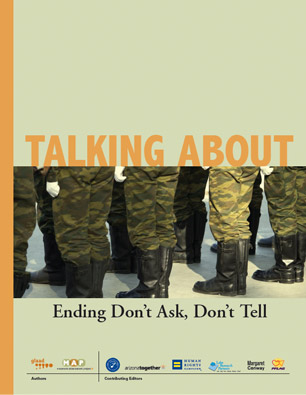 A solid majority of Americans (77%, according to a December 2010 ABC News/Washington Post poll) support allowing gay service members to serve openly in the U.S. military. And as the repeal process for the law known as “Don’t Ask, Don’t Tell” (DADT) is under way, the ban on open service by gay and lesbian troops continues to be part of the national conversation.

Talking About Ending Don’t Ask, Don’t Tell, written before the repeal process began in 2010, focuses on ensuring that discussions about repeal remain centered on the vital need for a strong military, emphasize the financial and personnel costs of DADT, and illustrate how DADT has put our country at risk by discharging essential service members just because they’re gay.