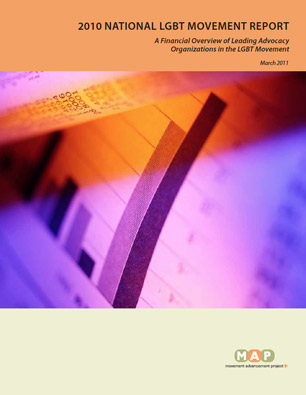 Revenue and Expenses. Organizations are experiencing significant declines in revenue (down 20% from 2008 to 2009), a sign of the combined effects of the economic downturn and decreased giving in an off-election year (2009). Organizations are adjusting to revenue declines by cutting expenses; 2010 budget estimates are down 18% from 2009 to 2010.

Fundraising and Fundraising Efficiency. Organizations are faring relatively well at retaining smaller donors, but are losing larger donors who give $1,000 or more per year. Fewer donors are attending fundraising events and organizations show less income from these events as a result. However, despite recent fundraising challenges, LGBT social justice advocacy organizations continue to be quite efficient in their fundraising, with an average of 79% of expenses being spent on programs and services, 9% on management and general expenses, and only 12% on fundraising.