/Policy /Employment /Issue Brief: The Need for an Executive Order

Issue Brief: The Need for an Executive Order 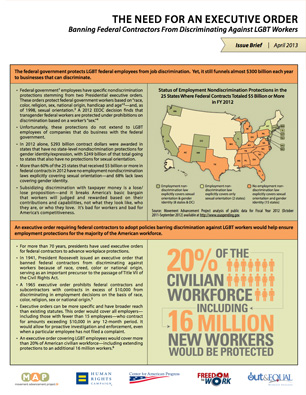 American taxpayers send almost $300 billion per year in federal contract dollars to businesses in states that have not yet passed laws to protect lesbian, gay, bisexual, and transgender (LGBT) workers from employment discrimination. In fact, a substantial majority (60%) of the 25 states in which businesses received $5 billion or more in federal contracts in 2012 have no employment protections based on sexual orientation. And more than two-thirds of those states (68%) have no employment nondiscrimination laws explicitly covering gender identity.

This discrimination with taxpayer money is a lose/lose proposition for taxpayers and LGBT workers—and it breaks America’s basic bargain that workers will judged and rewarded based on their contributions and capabilities. The new Issue Brief: The Need for an Executive Order—co-authored by MAP, the Center for American Progress, Freedom to Work, the Human Rights Campaign, and Out & Equal Workplace Advocates—looks at how an executive order prohibiting federal contractors from discriminating against LGBT workers would extend protections to an additional 16 million workers, and would cover more than 20% of the U.S. civilian workforce.