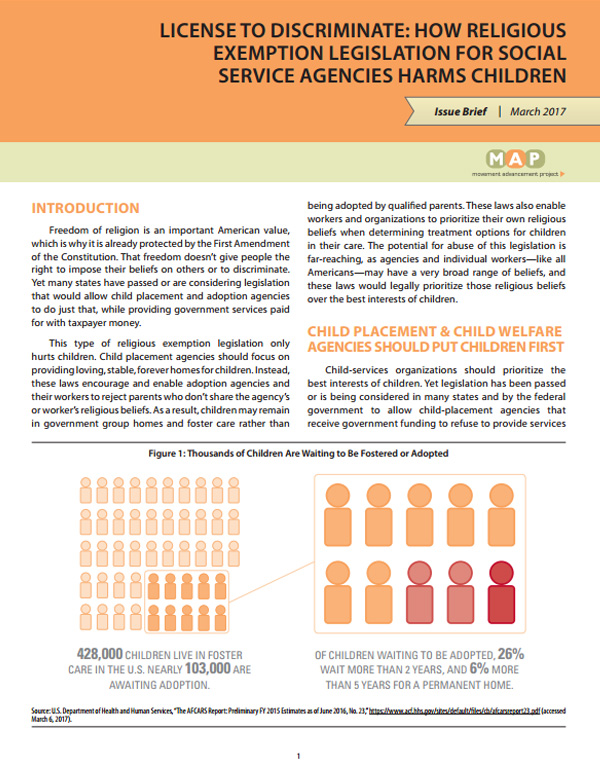 THIS REPORT HAS BEEN UPDATED. Click here for the current report.

The freedom of religion is one of our nation’s most fundamental values, which is why it is already protected in the First Amendment of the U.S. Constitution. Americans also believe in equal treatment, and while religious freedom is important, that freedom doesn’t give anyone the right to harm, discriminate against, or impose their beliefs on others. Yet many states have passed or are considering legislation that would allow child placement and adoption agencies to do just that, while providing government services paid for with taxpayer money

License to Discriminate: How Religious Exemption Legislation For Social Services Agencies Harms Children details how this type of religious exemption legislation hurts children. These laws encourage and enable adoption agencies and their workers to reject parents who don’t share the agency’s or worker’s religious beliefs instead of providing forever homes for children. As a result, children may remain in government group homes and foster care rather than being adopted by qualified parents. These laws also enable workers and organizations to prioritize their own religious beliefs when determining treatment options for children in their care. The potential for abuse of this legislation is far-reaching, as agencies and individual workers may have a very broad range of beliefs, and these laws would legally prioritize those religious beliefs over the best interests of children