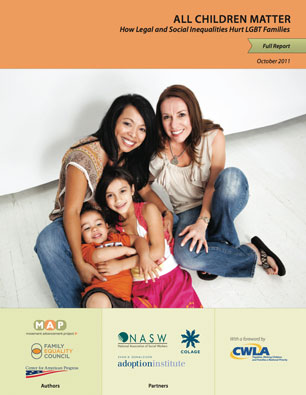 Public policy should strive to act in the best interests of children. However, there are 2 million children being raised by LGBT parents--children from all walks of life, living in almost every U.S. county--who have become collateral damage of ideology and laws designed to hurt LGBT people. All Children Matter is the most comprehensive look to date at these children; how they are failed by society, government and the law; and how simple changes to unfair laws can begin to ensure we are giving all children the chance to reach their full potential.

This 125-page Full Report contains expanded discussions, detailed tables and figures, full citations, references, attributions and clarifications that paint one of the most comprehensive portraits to date of laws and policies that fail to protect children with LGBT parents, as well as the most detailed recommendations for addressing these inequalities.

Also available: a Condensed Version that provides a high-level understanding of the Full Report, and a stand-alone version of the Executive Summary.

All Children Matter: How Legal and Social Inequalities Hurt LGBT Families brings together a coalition of LGBT leaders, policy experts and child advocates that includes the Movement Advancement Project, the Family Equality Council, the Center for American Progress, the National Association of Social Workers, the Evan B. Donaldson Adoption Institute, and COLAGE —with a foreword by the Child Welfare League of America.

The report finds that 2 million children have become collateral damage of decades of ideology, laws and policies designed to hurt LGBT people and families. These current laws:

LGBT families are already part of the American fabric. Public policy discussions often assume the nation is largely made up of married heterosexual couples raising their biological children. But fewer than a quarter of all US households fall into this category.

Simple, common-sense changes to laws could begin to protect all children and help them reach their full potential. All Children Matter concludes with 100 such recommendations across several key areas including: legal recognition of LGBT families; equal access to safety net programs; equal taxation; equal access to health care and insurance; inclusion in medical decision-making, FMLA and other laws that allow families to take care of each other; anti-discrimination laws; and research and education.