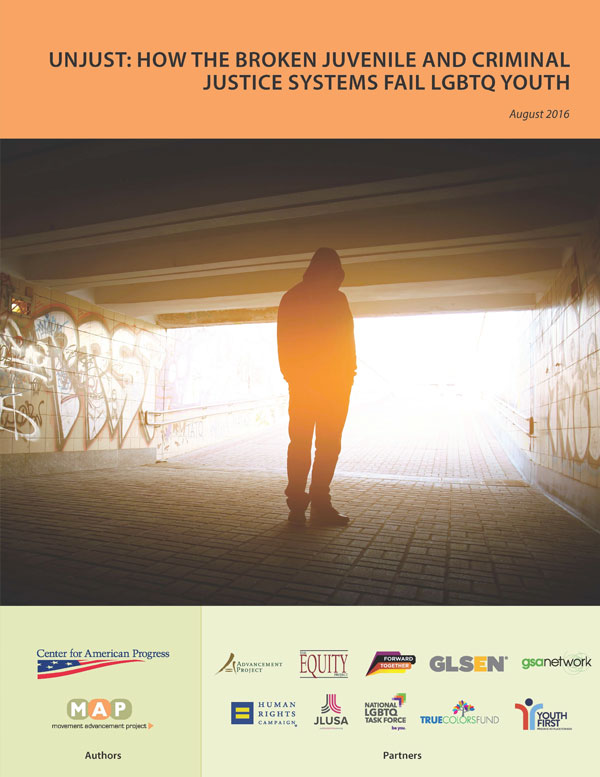 Unjust: How the Broken Juvenile and Criminal Justice Systems Fail LGBTQ Youth examines how as many as 3.2 million LGBTQ youth are vulnerable to discrimination, profiling, and mistreatment in the juvenile and criminal justice systems. In fact, LGBTQ youth are twice as likely to end up in juvenile detention; 20% youth in juvenile justice facilities identify as LGBTQ compared to 7-9% of youth in general. The report also documents the rampant mistreatment and abuse that LGBTQ young people face in court proceedings, detention and re-entry.

The report identifies several factors in the overrepresentation of LGBTQ youth in the system: pervasive anti-LGBT stigma and discrimination in families and communities; unsafe schools where LGBTQ students are disproportionately likely to enter the “school-to-prison pipeline”; and discriminatory enforcement of laws related to sexual behavior and drug use.

Among the shocking results of these problems: one in five young people in U.S. juvenile justice facilities identify as LGBTQ, and 85% of these individuals are youth of color.

The report also documents how LGBTQ young people are unfairly treated and abused in the system. It paints a disturbing portrait of discrimination and bias in court proceedings, rampant mistreatment and abuse at the hands of staff and other youth in juvenile justice facilities, and a dearth of support preparing for re-entry.

Because of discrimination and unjust treatment, the United States is endangering the lives and life chances of LGBTQ young people across the country. The Unjust report includes numerous stories about people, organizations and criminal justice institutions that are advancing positive changes to improve conditions and outcomes for LGBTQ youth. It also includes a series of recommendations for ensuring fairer treatment of LGBTQ young people in families, schools, communities and throughout the criminal justice system.