Paying an Unfair Price: The Financial Penalty for Being LGBT in America 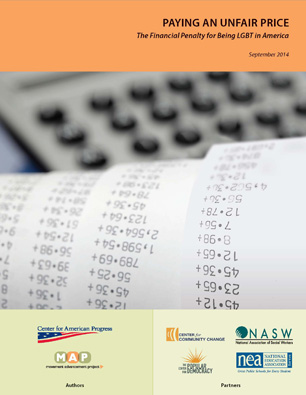 Paying an Unfair Price: The Financial Penalty for Being LGBT in America paints a stark picture of the added financial burdens faced by LGBT Americans because of anti-LGBT laws at the national, state and local levels. These laws contribute to devastating cycles of poverty and create unfair financial penalties in the form of higher taxes, reduced wages and Social Security income, increased healthcare costs, and more.

The report documents how inequitable laws harm the economic well-being of LGBT people in three key ways: by enabling legal discrimination in jobs, housing, credit and other areas; by failing to recognize LGBT families, both in general and across a range of programs and laws designed to help American families; and by creating barriers to safe and affordable education for LGBT students and the children of LGBT parents.

Paying an Unfair Price offers broad recommendations for helping strengthen economic security for LGBT Americans, such as instituting basic nondiscrimination protections at the federal and state level; allowing same-sex couples to marry in all states; allowing LGBT parents to form legal ties with the children they are raising; and protecting students from discrimination and harassment on the basis of sexual orientation and gender identity.

Join us on social media in sharing how anti-LGBT laws make it harder for you to be financially secure. Be sure to use the hashtag #UnfairPrice to share your story.