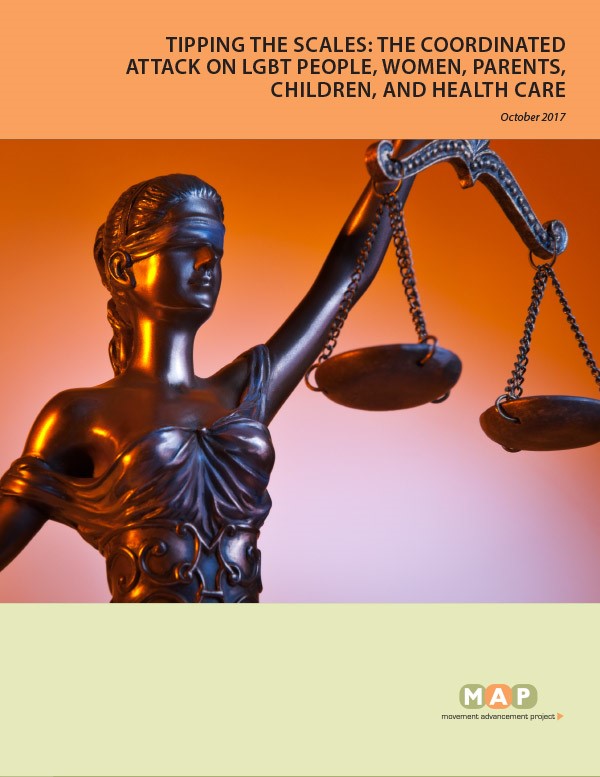 Yet, in October 2017, the Department of Justice issued sweeping guidance instructing federal agencies to provide significant leeway to staff and government contractors and grantees seeking religious exemptions from federal laws, rules and regulation, if they cite a religious belief as the reason for doing so. Additionally, the Department of Health and Human Services announced a sweeping religious exemption allowing any employer or insurance company to refuse contraceptive coverage in their health benefits. These actions at the federal level are part of a strategy to gut nondiscrimination and civil rights laws. Legislators across the country are also pushing sweeping religious exemption laws that permit individuals and businesses to discriminate. In fact, last legislative session, 46 religious exemptions laws were introduced across the country.

Tipping the Scales: The Coordinated Attack on LGBT People, Women, Parents, Children, and Health Care analyzes the mounting legislation and litigation across the country orchestrated to undermine nondiscrimination protections, comprehensive health care, and the regulations administering social and public services by inserting exemptions into the laws based on religious or moral beliefs. These attacks on the law include the so-called First Amendment Defense Act (FADA), state religious exemption laws in adoption and foster care, religious exemptions in healthcare including for reproductive care, denial of government services including marriages, denial of service in public businesses, the denial of employee benefits, and cases like the Hobby Lobby Supreme Court decision.

The report details the myriad ways religious exemption laws and lawsuits are being pushed forward, and their impact millions of Americans including 10 million lesbian, gay, bisexual, and transgender (LGBT) people and their children, 11.6 million single parents and children, 14.1 million unmarried couples, 62.4 million women who are eligible for birth control under the Affordable Care Act, and 1.6 million unmarried pregnant women.

According to a September 2017 PRRI survey, 72% of Americans support laws that protect LGBT people from discrimination in employment, housing and public accommodations. The same survey found that 68% of the public oppose allowing agencies that receive federal funding to refuse placing children with gay or lesbian people.