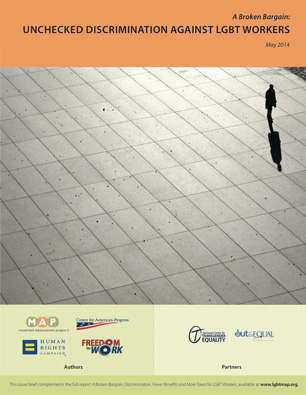 The basic American bargain is that those who work hard and meet their responsibilities should have the opportunity to get ahead. It is founded on the principle that workers will be judged based solely on their performance and qualifications—no matter who they are, what they look like, or where they are from. This basic bargain is not just an idea—it is embedded in laws that promote equal access to jobs and protect workers from discrimination. But these laws do not protect everyone.

A Broken Bargain: Unchecked Discrimination Against LGBT Workers paints a sobering portrait of widespread discrimination faced by LGBT people in the workplace and documents how LGBT workers continue to face unfair treatment, harassment, and discrimination. Yet they often have nowhere to turn for help. No federal law provides explicit legal protections for LGBT workers, and fewer than half of states have laws that protect workers based on their sexual orientation and gender identity/expression.

Offering the most current data, A Broken Bargain: Unchecked Discrimination Against LGBT Workers details the discrimination faced by LGBT workers, offers solutions for fair treatment at work, and outlines policy recommendations to level the playing field for LGBT workers.